Nike Flyknit tech has been integrated in a slew of styles from the sportswear giant. Classic kicks get an instant update with the woven technology, which doesn't just look cool, but is also friendlier to the environment and takes on bold, vibrant dyes without a problem. Newer styles are designed to utilize Flyknit's flexible, breathable and lightweight fibers so athletes can go harder and faster for longer without giving up comfort and support. Combined with Nike's trademark air cushioning, every style blends performance, good looks and all-day wearability. Going from the gym to after-workout activities and even just everyday errands, Flyknit is the perfect material for any situation.
eBay has provided more information about this product above and is not affiliated with or endorsed by Nike. 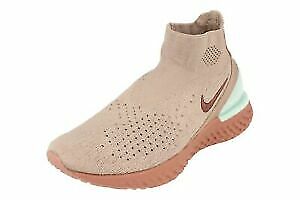 Women looking for training or running shoes don’t always have the same selection of shoes as their male counterparts and are often left with the same trainer as a man but in a more feminine color. Nike has designed women’s running shoes that fit to women’s unique foot styles. These training shoes designed for women are available in a wide array of styles and models, including the Court, Free, and Motion, and are engineered for peak performance in a wide array of settings, including running and sports.

What are Nike Flyknit women’s shoes made out of?

These Nike women’s running shoes are made from polyester yarn that is engineered in a precise knit construction and designed to be both strong and lightweight, providing a virtually seamless form-fitting and featherweight athletic shoe. All of Nike’s Flyknit training shoes feature the Flyknit technology to give women more options for training and running shoes.

How do these Nike running shoes for women work?

Nike uses several different knit patterns in order to make the upper portion of these shoes. This technique gives certain areas a tighter weave, which provides more support in some areas while still allowing more flexibility in other areas. The resulting Flyknit design combination of support and flexibility produces a women’s trainer that is true to fit and that can be worn for running or sports.

In what styles are Nike athletic shoes for women available?

The first introduction to these shoes came in February 2012 when they released the Racer, which are form-fitting and featherweight running shoes available for both men and women. Over the years, Nike has continued to release various models of women’s shoes, such as the Nike Free and the Air, made with the Flyknit technology. These styles include the following:

Do women have to wear socks with these running shoes?

While you can wear socks with these shoes if desired, the Nike Free was designed so you don’t have to. The Nike Free upper portion was engineered to conform to the wearer’s foot so that it feels like a sock even when running. It was also designed for optimum airflow as well as featuring a perforated panel at the top of the foot to dissipate heat. Other models of Nike shoes, such as the Air, Motion, Court, and Lunar, don’t have this same design and should be worn with socks.

Flyknit shoes don’t just benefit those who wear them but they also benefit the environment. According to Nike, production of these shoes reduces waste by about 60%. Nike has also transitioned the core yarn used in the production of the Flyknit shoes to recycled polyester to help reduce the amount of plastic bottles that end up in the landfill. All of the Nike Flyknit shoes, such as the Free and Air, are made with this same environmentally friendly standard.

Content provided for informational purposes only. eBay is not affiliated with or endorsed by Nike.