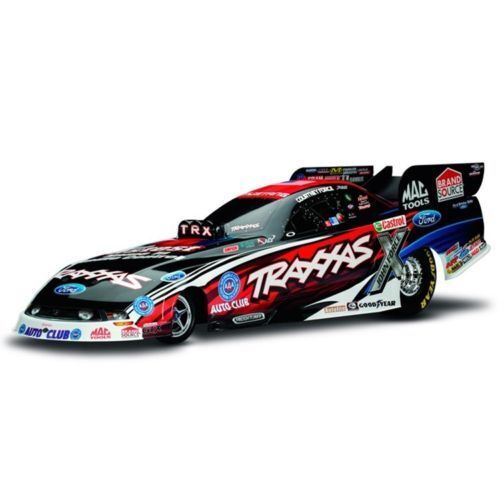 Funny car dragsters feature prominent tilt-up carbon fiber or fiberglass automotive bodies over a beefy custom chassis. It gives them the outward appearance of being like a regular car in spite of the fact that theyre closer to rail racers than street rods. These imitation body shells give funny cars races their unusual name, and diecast models can be found that represent them.

What manufacturers are represented in the NHRA funny car series?

Four automakers are represented by teams in the NHRA funny car series. Most companies that submit vehicles model the funny car shells after some family of motor vehicles that they make. This helps to give them exposure. Racing Champions has made diecast vehicle miniatures of at least one car from each of these companies. You can find funny car versions of the following motor vehicles:

What scale do funny car diecast vehicles come in?

These cars were sold under their Premier Editions brand, which means they are always modeled in 1/24 scale. Original packaging designed to reflect this features a protective film that perfectly fits 1/24 scale cars. This size is small enough to let you display your cars on a shelf, but its large enough to let you actually work the mechanism that raises and lowers the funny car auto body.

Why do funny cars feature the Creasy Family Motorsports brand?

A number of models were made that featured cars driven by stars from this organization. Since the group was dominant at Nationals and their drivers became big stars on film, collectors grabbed funny car models featuring their brand. They also made drag racing models at the time that featured the logo from these races as well as those from Dodge and other automakers.

Your miniature funny car will feature the same sponsors you see in old drag racing films because they were able to license genuine race teams from the time period the models were made in. You might recognize the following sponsors as having been on your stars car at the time:

What drivers do these diecast models represent?

You can find diecast funny car models that represent many different drivers. In addition to drivers such as Jeff Burton, Gary Densham, and Whit Bazmore, you can also find the following drivers as well as many more:

Content provided for informational purposes only. eBay is not affiliated with or endorsed by NHRA.